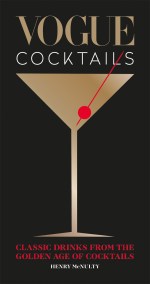 The Little Black Dress of cocktail books. From the archives of British Vogue, the classic cocktail book, for a new generation of discerning drinkers. Vogue…