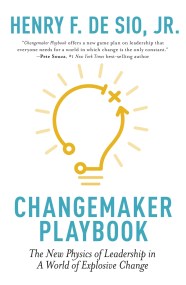 Our one-leader-at-a-time past has given way to a present reality where everyone has the potential to lead in every aspect of life. We all have…