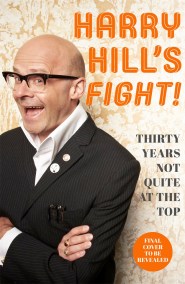 In this highly entertaining memoir from one of the nation's most popular comedians, Harry Hill takes an honest and hilarious look back at his life…