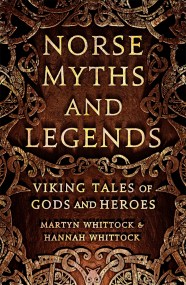 'A terrific, detailed introduction of these wonderful stories and the pantheon of characters in them . . . their writing is vivid and lively .…