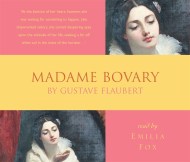 Emma Bovary is the beautiful, frustrated wife of a provincial doctor. Torn between fantasy and reality, Emma, mesmerising to the opposite sex, embarks upon love…