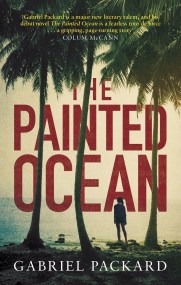 When I was a little girl, my dad left me and my mum, and he never came back. And you're supposed to be gutted when…