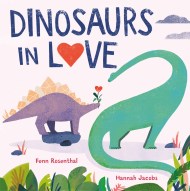 Based on the viral, heart-melting song 'Dinosaurs in Love', comes a sweet and deceptively simple story about love, longing, and loss by three-year-old Fenn Rosenthal.…