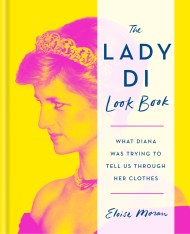 *** Fashion writer Eloise Moran has studied thousands of pictures of Princess Diana over the past few years. Looking carefully at Diana's clothes, she discovered…