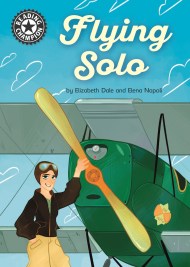 Amy Johnson likes a challenge. She'd like to prove she is one of the best pilots there is. It's 1930 and she is attempting to…