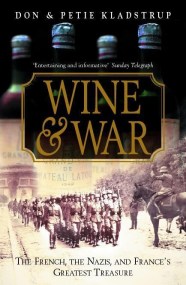 In the vineyards, wine caves, and cellars of France as war and occupation came to the country winemakers acted heroically not only to save the…