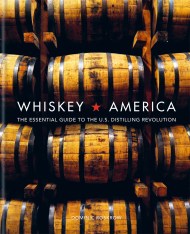 What can we expect from the best whiskey producers in America today? Whiskey America showcases some of the most exciting new styles of whiskey and…