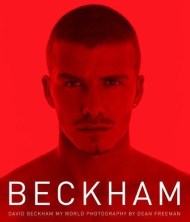 Manchester United footballer David Beckham has been voted one of European football's brightest stars. His marriage to Spice Girl Victoria Adams and the birth of…