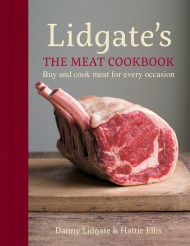 "They put their customers first and are proof that natural produce, service and knowledge are a formidable combination." - Sir Richard Branson "Lidgate's... the best…