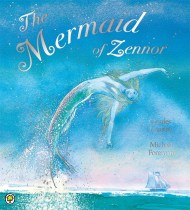 The Mermaid of Zennor

A magical mermaid picture book, based on a classic Cornish story. On the rugged Cornish coast, where the land meets the sea, lies the village…