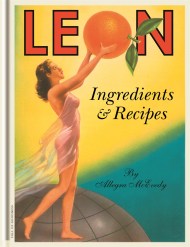 'Leon serves food that is fresh, seasonal, locally sources and really good. The twist is that your food is served really fast. The double twist…