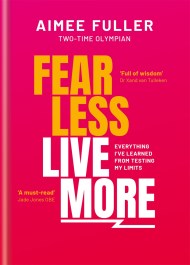 Harness your fears and supercharge your life with this inspirational guide. As someone who has lived outside her comfort zone, Aimee Fuller has a lot…