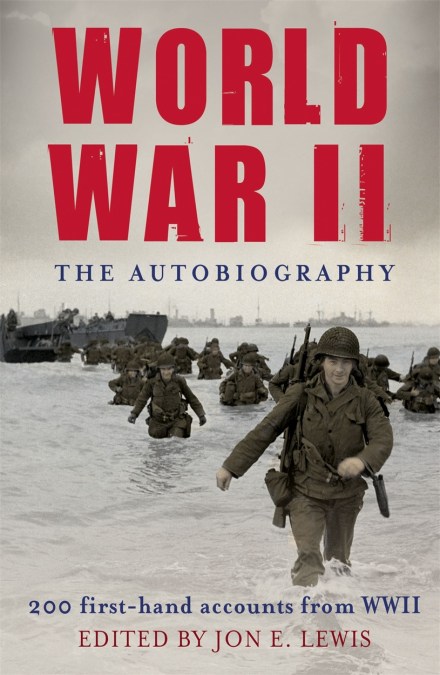 by Jon E. Lewis
A remarkable series of over 200 eye-witness accounts taken from diaries, letters, speeches, interviews and memoirs of those who were there: pilots, sailors, generals, infantrymen, war correspondents and leaders.

These include Spitfire pilot Richard Hillary’s account of bailing out of his plane in the Battle of Britain; a German sailor’s view of HMS Royal Oak being torpedoed at Scapa Flow; insights into Rommel’s ailing health from a lieutenant in the Afrika Korps; famous war correspondent Ernie Pyle’s account of GI meals during Operation Torch; Anne Frank’s recollection of the rounding up of Jews in Amsterdam; the last letters home from anonymous German soldiers in Stalingrad; the view from a Japanese cockpit over Pearl Harbor on 7 December 1941; a German officer’s memories of the airborne assault on Crete in May 1941; the firestorm following the bombing of Dresden in July 1943 in the words of a German woman; a lieutenant in the 1st Airborne Divsion’s eyewitness account of the fighting in Arnhem; Martha Gellhorn on the aftermath of the Battle of the Bulge; a British tank officer crossing the German border on 28 February 1945; on the Kokoda Trail in New Guinea; an Allied intelligence officer being executed by the Japanese; the tunnels of Iwo Jima; and a kamikaze pilot’s final letter. 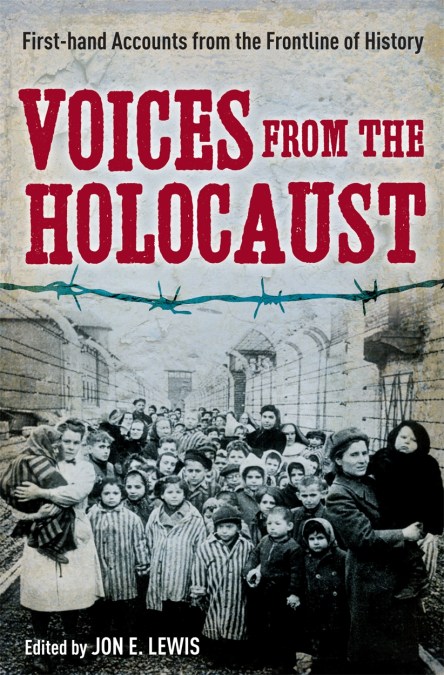 Voices from the Holocaust

by Jon E. Lewis
The testament to a tragedy.

Voices from The Holocaust follows the whole history of the ‘Shoah’ from Hitler’s rise to power to the Nuremburg trials, but of course the exterminations and death camps of ‘The Final Solution’ take centre stage. It tells the story from the perspective of the people who were there, and were witnesses – on both sides – of the horror.

While some of the eye-witnesses are well-known, such as Anne Frank, Primo Levi and Heinrich Himmler, the book includes recollections of camp inmates, SS Totenkopf guards and the British soldiers who liberated Belsen. Shocking, powerful and personal, Voices from the Holocaust retells history, written by those who were there. 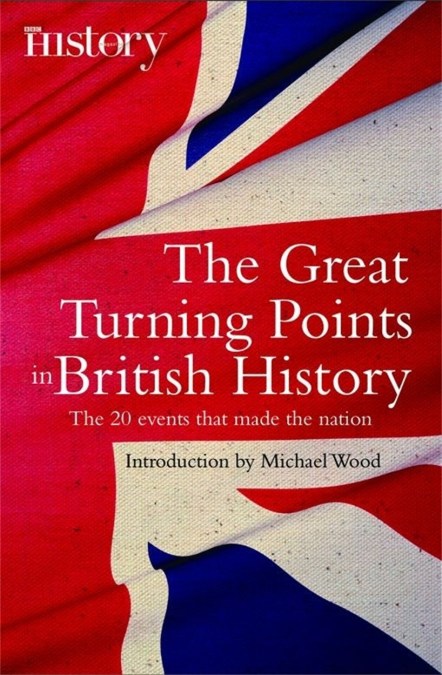 by Michael Wood
Twenty of the most crucial moments in Britain’s history.

BBC History Magazine asked a selection of leading historians to choose and describe the twenty most important turning points in British history from AD 1000 to 2000. Collected together, their choices present a new way of looking at our nation’s story.

From the Danish invasion of Britain in 1016, to the Suez crisis in 1956, the key moments include victories (or defeats) both at home and abroad, plague, reform and even revolutions that have reshaped the British way of life. Each contribution brings the past to life, offering new perspectives and food for debate: did the Battle of Agincourt change England’s role in Europe? What was the impact of American independence on Britain? Was 1916 more important than 1939? Thought-provoking and inspiring accounts. 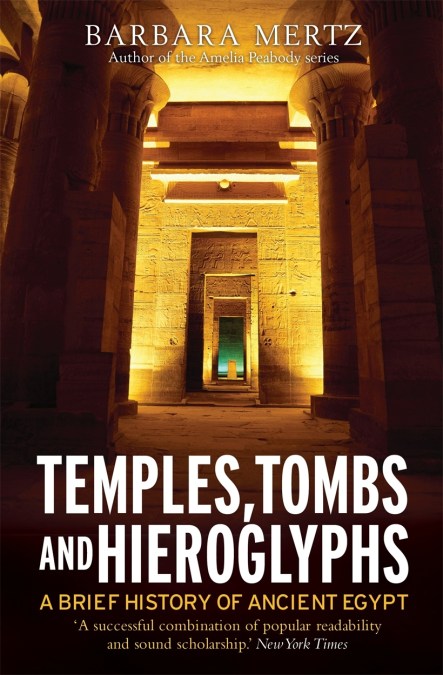 Temples, Tombs and Hieroglyphs, A Brief History of Ancient Egypt

by Barbara Mertz
Have you ever wondered what it was like in the Valley of the Kings? To unlock the mysteries of the pyramids? Or sail down the Nile on Cleopatra’s Barge? In her fascinating new introduction to the wonders of ancient Egypt expert Barbara Mertz tells the extraordinary history from the first stone age settlements to the age of Cleopatra and the Roman Emperors. It offers not just insights into the glories of the Pharaohs, but also intriguing glimpses of everyday life, folklore and culture. 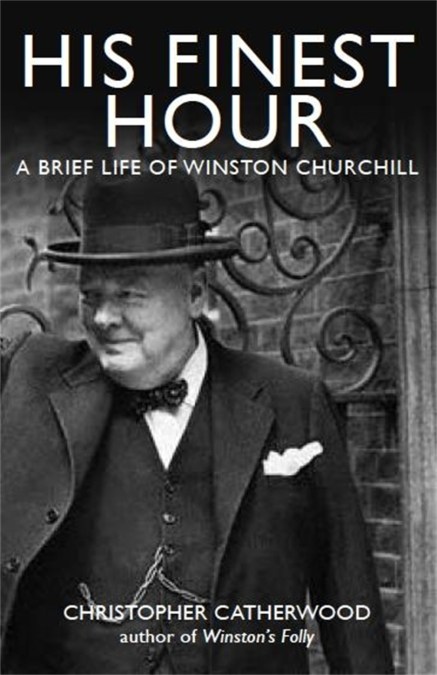 His Finest Hour: A Brief Life of Winston Churchill

by Christopher Catherwood
‘A gem. Brief, authoritative and fair in its judgements – an intensely readable introduction to this most complex and fascinating man’ – Graham Farmelo, award-winning author of The Strangest Man

A new and dynamic reappraisal of Winston Churchill, and his finest hour in 1940-1.

Who was Winston Churchill? Even fifity years after his death he is one of the most iconic figures in British history: as a young man he was a maverick journalist, his many positions in politics before 1940 marked him out as a courageous but foolhardy man.

Yet it is Churchill’s record in war, which has recently been questioned, that confirms his genius as a military commander and national leader ­- someone who understood the dangers of Nazi Germany before 1939; someone uniquely capable to lead the empire through the turmoil of the Second World War. Catherwood argues that it was Churchill’s stand in 1940-41 that saved Britain and only he was able to bring together the allies that eventually defeated Hitler in 1945.

Catherwood has produced a challenging yet accessible reassessment of the life and career of Winston Churchill, lion of British history and flawed hero. 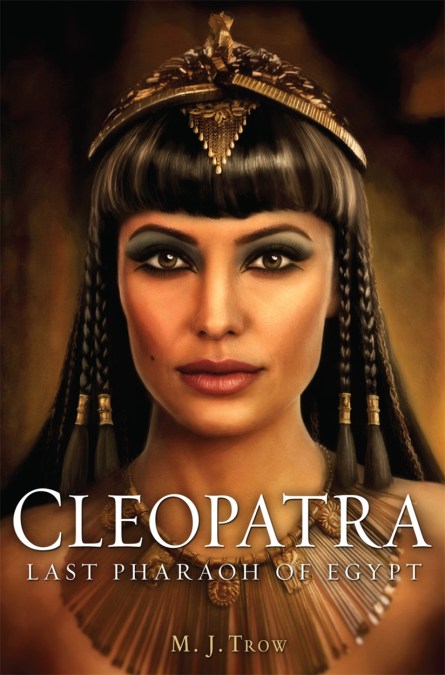 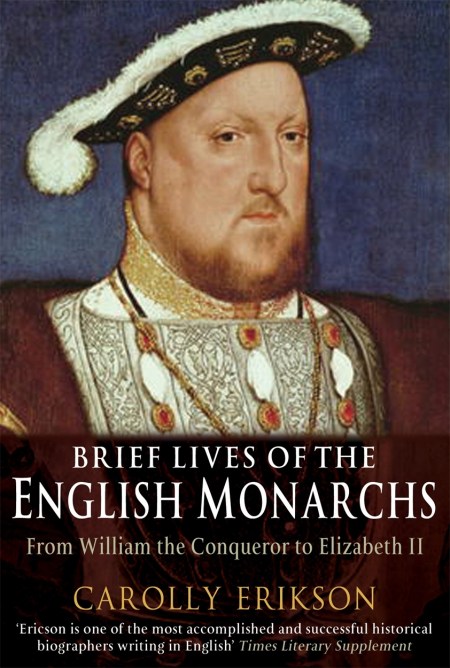 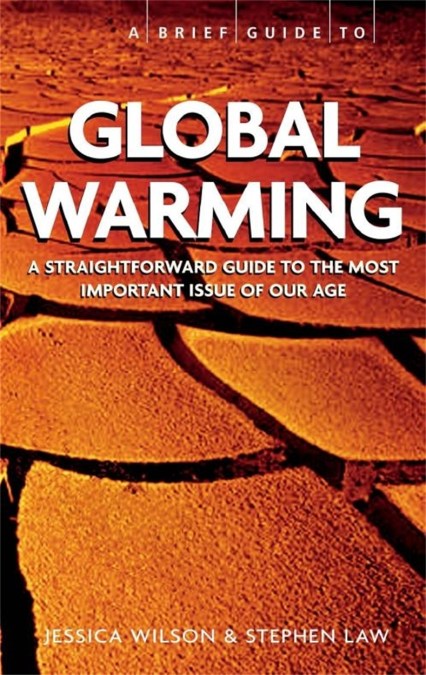 by Jessica Wilson by Stephen Law

It now seems certain that our planet is warming. Is it the result of human activity and if so how do we combat it? This reasoned and reasonable guide helps to clarify the controversial issues and the way forward.


An accessible guide to climate change that not only gives reasonable answers to the big questions surrounding the issue, but also takes us inside the corridors of power and the basements of the United Nations, where countries are engaged in a game of climate-change poker. For the individual, wondering whether to sell their seaside property or invest in a small wind-farm, this book offers sensible answers. It gives us the best and worst case scenarios and sets out how we can each address this contentious but vital issue. 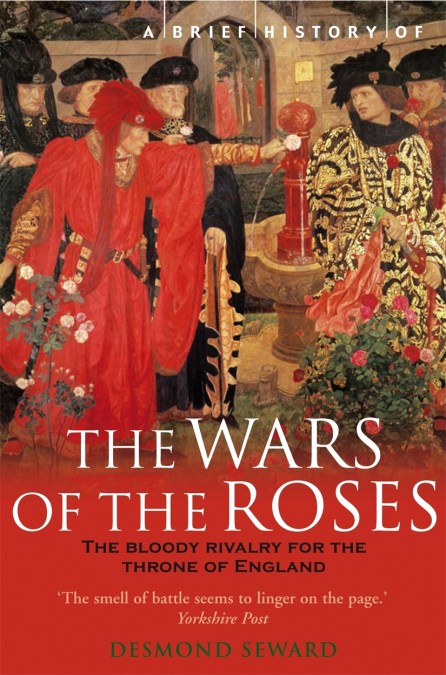 A Brief History of the Wars of the Roses

by Desmond Seward
During the fifteenth century England was split in a bloody conflict between the Houses of York and Lancaster over who should claim the crown. The civil wars consumed the whole nation in a series of battles that eventually saw the Tudor dynasty take power. In A Brief History of the Wars of the Roses, Desmond Seward tells the story of this complex and dangerous period of history through the lives of five men and women who experienced the conflict first hand. In a gripping narrative the personal trials of the principal characters interweave with the major events and personalities of one of the most significant turning points in British history. 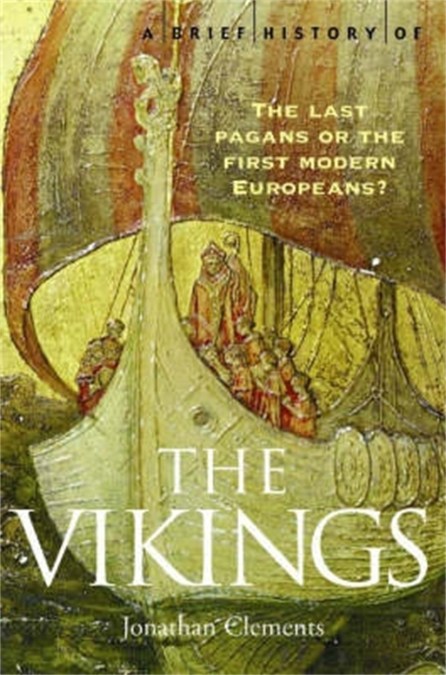 A Brief History of the Vikings

by Jonathan Clements
‘From the Fury of the Northmen deliver us, O Lord.’

Between the eighth and eleventh centuries, the Vikings surged from their Scandinavian homeland to trade, raid and invade along the coasts of Europe. Their influence and expeditions extended from Newfoundland to Baghdad, their battles were as far-flung as Africa and the Arctic. But were they great seafarers or desperate outcasts, noble heathens or oafish pirates, the last pagans or the first of the modern Europeans?

This concise study puts medieval chronicles, Norse sagas and Muslim accounts alongside more recent research into ritual magic, genetic profiling and climatology. It includes biographical sketches of some of the most famous Vikings, from Erik Bloodaxe to Saint Olaf, and King Canute to Leif the Lucky. It explains why the Danish king Harald Bluetooth lent his name to a twenty-first century wireless technology; which future saint laughed as she buried foreign ambassadors alive; why so many Icelandic settlers had Irish names; and how the last Viking colony was destroyed by English raiders.

Extending beyond the traditional ‘Viking age’ of most books, A Brief History of the Vikings places sudden Scandinavian population movement in a wider historical context. It presents a balanced appraisal of these infamous sea kings, explaining both their swift expansion and its supposed halt. Supposed because, ultimately, the Vikings didn’t disappear: they turned into us.

by J.P. McEvoy
Since the dawn of humanity, men have attempted to divine the nature of the heavens. The first astronomers mapped the movement of the seasons and used the positions of the constellations for augurs and astrology.
Today, the search goes ever deeper into the nature of reality and life itself. In this accessible overview, astrophysicist J.P. McEvoy tells the story of how our knowledge of the cosmos has developed. He puts in context many of the greatest discoveries of all time and many of the dominant personalities: Aristotle, Copernicus, and Isaac Newton, and as we approach the modern era, Einstein, Eddington, and Hawking. 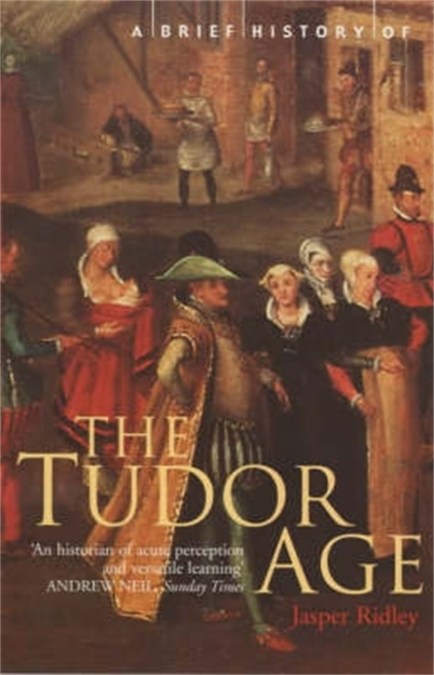 by Jasper Ridley
From the arrival of Henry Tudor and his army, at Milford in 1485, to the death of the great Queen Elizabeth I in 1603, this was an astonishingly eventful and contradictory age. All the strands of Tudor life are gathered in a rich tapestry – London and the country, costumes, furniture and food, travel, medicine, sports and pastimes, grand tournaments and the great flowering of English drama, juxtaposed with the stultifying narrowness of peasant life, terrible roads, a vast underclass, the harsh treatment of heretics and traitors, and the misery of the Plague.
Next Page