A book so funny it makes you wish you were the subject of a murder investigation in Exeter
Al Murray
Funny and gripping
Dara Ó Briain
Exceptionally funny... crime writing (in the Exeter area) will never be the same
Marcus Brigstocke
Laugh out loud funny. Detective Roger Le Carre is a crime-solving comedy GOD
Mark Billingham
Fergus Craig is one of the funniest people I know and this book proves it. I can't wait for you to get involved in his VERY silly thriller. We all need more laughs like this
Aisling Bea
What's better than a good crime novel? I'll tell you - a spoof crime novel, by the absurdly funny and clever Fergus Craig
Miranda Hart
Tea-spittingly hilarious. Shades of Spike Milligan, Douglas Adams and Alan Partridge
Chris Brookmyre 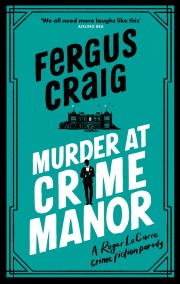