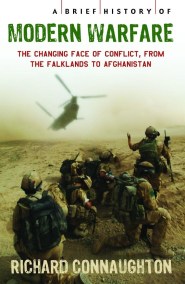 Since Vietnam, both the way we fight and our reasons for going to war have become much more complex. The importance of a conflict is…