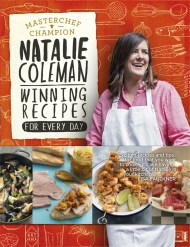 Natalie Coleman won MasterChef 2013 with a Scotch egg, and ever since she's been showcasing the same fresh, fun, down-to-earth cooking that made her a…