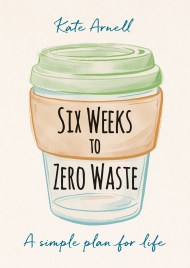 We are in the midst of a worldwide waste epidemic, where the average person in the UK throws away their own body weight in rubbish…