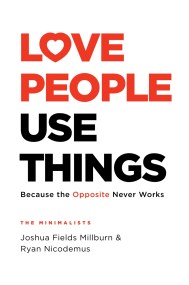 'The Minimalists show you how to disconnect from our conditioned material state and reconnect to our true essence: love people and use things. This is…