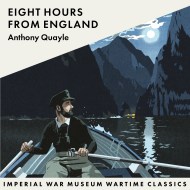 Autumn 1943. Realising that his feelings for his sweetheart are not reciprocated, Major John Overton accepts a posting behind enemy lines in Nazi-Occupied Albania. Arriving…