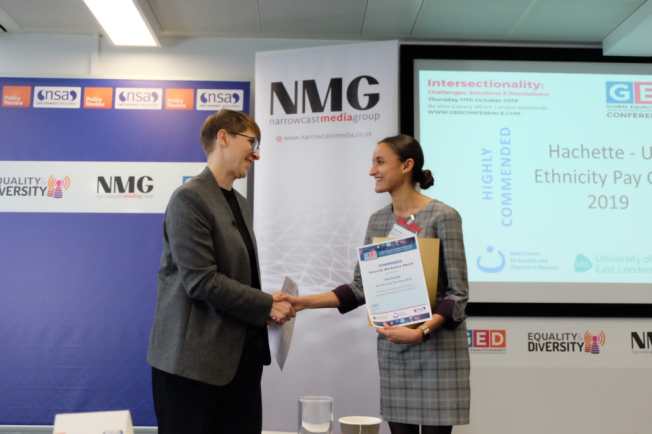 We’re delighted to report that we received a Highly Commended Award at the Global Diversity and Equality (GED) Awards, in the category of Inclusive Workplace. The award was given in recognition of the publishing of our Ethnicity Pay Gap Report in April; we’re one of only a handful of companies to have done so. Saskia Bewley, Head of Diversity and Inclusion at Hachette UK, attended the GED Conference to receive the award on behalf of Hachette UK along with Ruth D’Rozario and Rachael Jones, the co-chairs of THRIVE, Hachette UK’s BAME Network. The Award follows hard on the heels of our shortlisting for an Innovation in Flexible Working Award by WorkingMums.co.uk, recognising Hachette’s commitment to Flexible Working and support of staff who choose to work flexibly.

Hachette UK HR Director, Melanie Tansey, says: “Our approach to flexible working and the publication of our first Ethnicity Pay Gap report and action plan are part of our wider ambition to attract, recruit and retain the best talent from all backgrounds. We are delighted to be in such good company on these shortlists. It’s thrilling and rewarding for the work we are doing to be recognised in this way.”