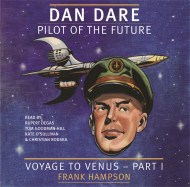 From the pages of the seminal British boys' adventure comic, The Eagle, comes the legendary Dan Dare - Pilot of the Future, created by Frank…