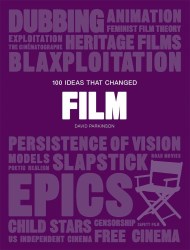 A concise and accessible pocket guide to the forces that have shaped film. 100 Ideas that Changed Film chronicles the most influential ideas that have…