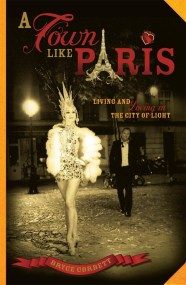 Fleeing London, in search of adventure and determined to sample some of the famed delights of the City of Light, our hero arrives in Paris…